Many people claim that a pure electric-powered stern thruster and tunnel thruster is the shipping industry’s future. But are they? This article will discuss the advantages and disadvantages of pure electric marine propulsion systems.

Before tackling the advantages and disadvantages of the pure electric marine propulsion systems, this article will first discuss how they work.

But where do these generators get these electrical loads? Generators may use gas or diesel and solar power to kick start. Electric marine propulsion systems still have significantly lower emission rates than diesel propulsion engines.

Here are the advantages and disadvantages of battery powered ship propulsion:

Electric marine propulsion systems are quieter than diesel propulsion engines chiefly because the propellers are not directly connected to the shaft, hence less noise and vibrations.

Boat passengers are more comfortable riding on board because of the less noise and vibrations. Additionally, electric-powered dinghies used in nature reserves do not disturb birds and other animals as boats cruising along the river and lake.

Electric marine propulsion systems and their components, including the stern thruster and tunnel thruster, have a higher upfront cost than diesel propulsion engines.

Additionally, some parts and components are uncommon. It may be challenging to find spare parts or replacement parts in the market, and their costs are likely to be high.

It is also hard to find skilled labour with expertise and knowledge in installing electric marine propulsion systems.

The upfront cost of battery powered ship propulsion and its components may be high, but using them is cost-effective in the long run.

Firstly, you get a portion of the energy for free if you use solar panels in addition to the generators.

Secondly, electrical boat propulsion systems use less diesel fuel. The price of diesel barrels fluctuates in the market. The lower your fuel consumption, the more money you save.

Lastly, diesel fuel increases friction in the engines. It means that the wear and tear of your engine are much faster because of the damaging friction. You have to spend more money on maintenance, repair, and component replacements for diesel propulsion engines.

It does not include the training for minor or immediate repair; and troubleshooting, yet in case issues happen on board.

Firstly, it has lower carbon emission rates. Some are almost zero, especially for small boats and dinghies. It helps in the reduction of air pollution, which is one of the causes of respiratory issues.

Secondly, electric marine propulsion systems are more sustainable as they use renewable energy, such as solar and wind. Diesel is one of the non-renewable resources today, and Earth’s diesel reserves have continuously decreased throughout the years.

Thirdly, noise pollution can disturb the ecosystem underwater. Many marine mammals communicate through echolocation, and noise and vibrations can disrupt this method of communication.

Secondly, the speed is much slower in the electrical propulsion system.

Now that you know the advantages and disadvantages of battery powered ship propulsion, it is time to discuss its applications. 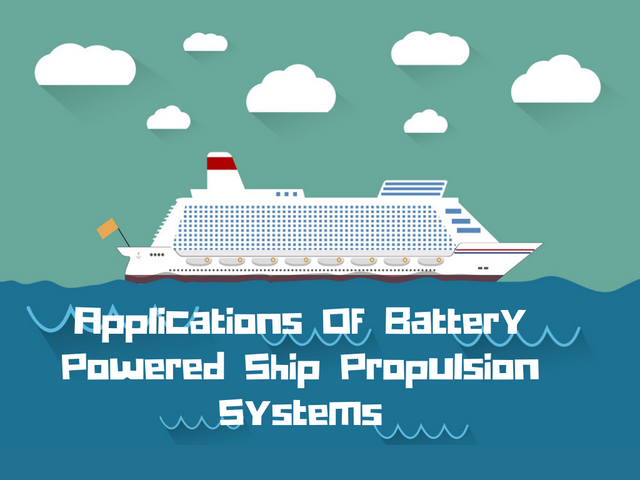 Many watercraft now integrate hybrid and pure electric marine propulsion systems. Here are a few of them:

Passengers are more comfortable in low noise and vibration-free boats and ships. It has lower carbon emissions as well.

Survey and research ships are large vessels in charge of mapping the ocean floor. They are used for hydrography, oceanography, dredging, and marine archaeology.

These vessels use various kinds of sonar for research. A more silent engine is advantageous for this kind of work.

Additionally, the silent engines do not disturb the schools of fish underwater.

The role of icebreakers is to break the ice sheets floating to clear the way for other vessels. The electric marine propulsion systems’ more efficient stern thruster and tunnel thruster are advantageous for this task.

Battery powered ship propulsion is indeed the future of the shipping industry. But similar to other inventions, it still needs more improvement for better service and functions.

Nevertheless, it is a good step towards a sustainable and eco-friendly shipping industry.