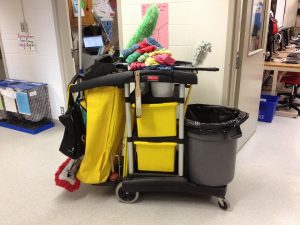 Cleaning cutbacks have spawned a rash of dirty schools which the teaching union warns is causing a serious health risk to staff and pupils. A recent online survey completed by union representatives found that 80 percent of people who participated from 600 Scotland schools said there was a tremendous drop in cleaning frequency. The reason is that budget cuts in recent years have taken their toll.

Increasing filth is not the cleaners’ fault. The number of hours that they are paid to clean have been cut leaving them to work over their contracted hours to get classrooms cleaned properly.

The union reported there being days of the week where no cleaning was done at all. Toilets are being left smelling foul, vomit is not being thoroughly cleaned and bins are not being emptied out every day.

Cleaners have also been left to clean with plain water if not cheap cleaners. Either way, they cannot get each classroom cleaned the way they should be every single day. The cleaning staff also do not get the time to clean the rooms properly. There is no way that schools can be cleaned sufficiently to leave a healthy, appropriate environment for students or staff to learn or teach safely at this rate.

According to the EIS, the survey provided clear evidence as to two things. One, there has been a reduction in the frequency of cleanings, and two, the quality of cleaning has gone down as well.

The Health Impact on Pupils and Staff

The survey reveals that the health and wellbeing of staff and pupils have been impacted because cleaning is being done less frequently. The lower quality cleaning services also affects their health. Some teachers have reported having to clean their own classrooms which puts more stress on them to do their own jobs as well as that of a professional cleaner. The surveys went to 3000 EIS members who also responded that the situation is problematic enough that it is high time the rate of poor cleaning be corrected. The general secretary was worried upon reading the survey results.

Cuts to cleaning are straining the staff, the teachers, and the pupils. These cuts are making a bad impact on both learning and teaching. The unhealthy environment of dirt, germs, and filth in schools does not help the situation at all. Diseases can be spread more readily and that can impact attendance. Learning and teaching will be greatly affected, and the wellbeing of the community at large is also at stake if things do not improve.

Diseases such as norovirus have begun to spread. Insect and rodent infestations are also happening. Both are clear consequences of improper cleaning to schools. One Scottish government spokesperson stated that local authorities have got to start ensuring that schools are made clean and safe with the use of industrial jet washing.